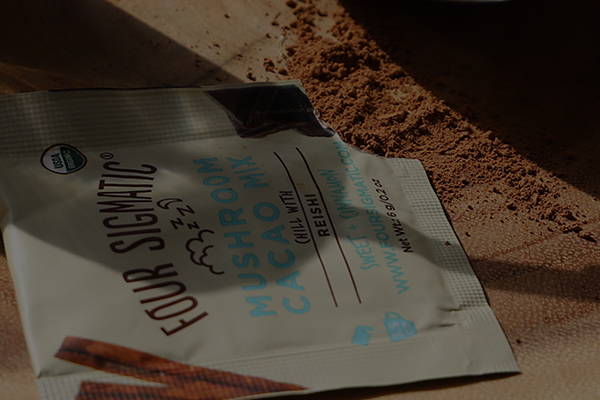 Four Sigmatic’s founder Tero Isokauppila was born in Finland, where he learned to respect and learn from nature. In 2012, Tero founded Four Sigmatic with the dream of bringing the power of mushrooms to all. The company hopes to upgrade daily rituals with easy-to-use elevated coffee and better evening tonics for healthier ways to meet the demands of bustling, everyday life.

What is Four Sigmatic?

The founders of Four Sigmatic saw how stressed, overworked, and overwhelmed many people are, and realized how this often presented itself as a lot of coffee consumption and too little sleep. In order to help, they revitalized a centuries old tradition of brewing mushroom team, and turned a coffee habit into a nourishing ritual.

What is Four Sigmatic Mushroom Coffee?

Fruity and medium-flavored, their instant coffee contains 500 mg of dual-extracted lion's mane (pom-pom-like mushrooms touted for their neuroprotective effects) and chaga mushrooms (an immune-boosting superfood). Blended together with 100% Arabica coffee, this instant coffee powder delivers a boost of energy and nutrition.

Why is Four Sigmatic Good for You?

According to Four Sigmatic, their mushroom coffee can help you with focus, make you less jittery, support your immune system, improve your sleep habits and even give you more energy!

Does Four Sigmatic Have Caffeine?

Yes, Four Sigmatic Coffee does have caffeine, although most products have the equivalent to half a cup of coffee.

Yes, all products are vegan and gluten free.

Where To Buy Four Sigmatic?

Four Sigmatic can be found on The Alchemist’s Kitchen website, or at any of our retail locations.

Does Four Sigmatic Get You High?

These products do not contain any psychedelic mushrooms, so no, you will not feel high.

During pregnancy it is important to consult your doctor. Traditionally, mushrooms have been used during pregnancy to support the mother’s health and energy levels.

For any other Four Sigmatic questions, check out their FAQs here.